This was one “message” (title) I never wanted to think of or experience in my life. But, no matter how much I prayed for this cup of offense to pass by me, it never did.

Let me put forward to you an experience of a crazy offense. I fell into the bait of offense when I realized the edge to which a brother very close to my heart had rejected my family. Well, I kind of knew this was coming. I could smell it, see it and already start to experience this, even though it looked subtle. But I was hoping that the whole thing would take a 180-degree turn and at the last minute things would change and not be the way it had happened. But to my gorgeous destined purpose, it swirled like a wind and hit my heart to a point that I was drowned. Well, let me put it this way, I was hurt so bad at the very act of rejection, that I let the whole bit affect me so bad.
Almost three whole days and nights I battled with bitterness. I never fathomed that this bitterness would ever let go off its clutches. My decisions that followed after this crazy period of hurt was, “I’m not going to church; I hate people; if close ones can be so fake and ignorant about you, what can describe the rest of the world; I will withdraw from my church responsibilities in its completeness; I want to be alone and away from anything do with being a people person……” I went on and on with this chain of negative decisions. Because I carried this inside of me, I ended up speaking rudely to the people who were close to this brother. I did not even want to see a glimpse of their faces lit up with smiles of joy and happiness. I became so cold and was chained to being limited and limiting Jesus.

But, God! This God who looked at chaos said, “Let there be light”. If God wants you to overcome the Egyptians who treated you like slaves, He will definitely part the Red Sea in the midst of a Pharaoh whose heart is as hard as a metal. He looked into my mess and declared loudly in Heaven, “Let there be peace”. Within five days the chaos I carried just vanished. The hurt wasn’t there anymore, to the point that my negative decisions did not come to pass. He parted the Sea of bitterness and let me walk out of heaviness to the other side. He drew me out of the pit and set me to a place of connectivity. Did I want it? No. Leave it to me I will choose not to forgive, because my humanness doesn’t extend pardon. “But it is no longer I who live, I have died in the baptism pool and the life that I now live is the life of Jesus Christ.”

God gets you out of deep pits of rejection and offense. Don’t stop talking to God. May be, whatever you commune with Him are the negative words in your heart; but don’t stop. Let Him know the miserableness inside of you. Because when He asked Adam, “Where are you?” All He wanted was Adam to talk back and tell Him the state of His heart. The answer Adam gave marked the specific time of the resurrection life for the fallen world. Man hid from God, man did not want to come back to God and man did not ask for anything called salvation. But, God! Even if you don’t want the solution, He wants it! He gives it and sets your foot on high places of righteousness and love.

So if you dealing with bitterness or un-forgiveness, just keep taking to Him. As times passes by you will definitely see the blood shed on the cross do its mighty work of restoration of peace and wholeness. All that you held close will look like rubbish in the surpassing knowledge of His love and mercy. People who offend you royally, becomes candidates of your compassion through Christ. Sooner you will be strong and bold and will not stop reaching out and loving people. You were designed for good works and your Designer will definitely fix you, no matter whatever deficiency is seen in you.

You are called to forgive and love like He did. He will shower grace on you to do what He plucked you out of darkness for.

“Put up with one another. Forgive. Pardon any offenses against one another, as the Lord has pardoned you, because you should act in kindness.” – Colossians 3: 13 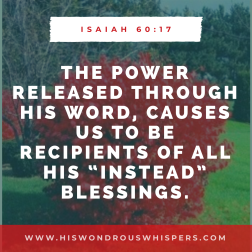 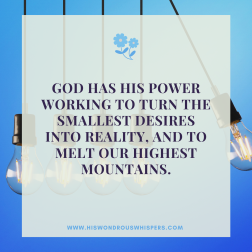